Do you know this book? My mother sent it to me maybe 10 years ago. “Why is mom sending me a potty training book?” I thought when I saw the cover. “I don’t even have children.” 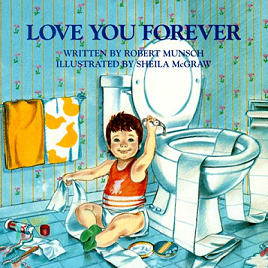 Then I opened it and saw her inscription: “Always, Mom.” The loops in the letters were big and round. This was years before Parkinson’s disease reduced her handwriting to a crabbed scrawl.

It isn’t a potty training book. It’s about a little boy who at every age drives his mother to distraction. On the cover, for example, he’s about to flush her silver wristwatch down the toilet. But every night, on every other page–even after he’s much too old for it to be cool any more–she holds him in her arms and sings this refrain:

I’ll love you forever.
I’ll like you for always.
As long as I’m living,
My baby you’ll be.

“He grew and grew,” the book keeps saying. He grew from a baby to a toddler, a boy, a teenager, a man.

And then the focus changes. Instead of saying “He grew and grew,” the book starts saying, “She grew older and older.” And the roles reverse. The last time she sings the song, she can’t finish. She stops before saying “As long as I’m living.”

This sequence pretty much captures the transition.

When she stops singing, the book doesn’t say she dies, not quite. And maybe she doesn’t. My mother hasn’t died, but she can’t sing a song all the way through any more. Fortunately the man in the book now has a baby daughter to sing to, as do I. 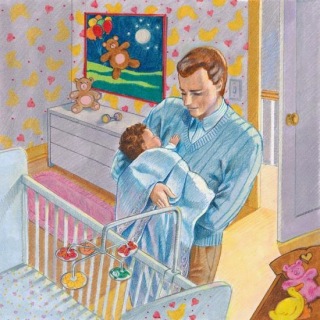 The night the book arrived from my mother, I had a party to attend. I didn’t go. I kept thinking I could pull myself together, but eventually it got too late and I just squeegeed myself off the floor and went to  bed.

Years later, when CJ was two-and-a-half, she found the book on the shelf. Seeing the cover, with the boy’s impish smile, she thought it must be funny. “Read this, Daddy,” she said. “Read the potty book!”

I tried to get out of it, and maybe I succeeded the first night. But eventually she wore me down and I read it to her. After that her mom hid it for a long time, but CJ kept asking. When CJ started a Spanish language pre-K I got another copy, in Spanish. The Spanish for “he grew” is crecía . The Spanish for “she grew older” is envejecía .

I can’t read it two nights in a row. Once a week is about all I can stand, and sometimes after the second week I’ll hide it again. CJ’s mom runs interference for me sometime. “Don’t ask Daddy to read that book,” she told CJ. “It’s too sad.” CJ has started calling it “The Sad Potty Book.”

CJ doesn’t really get the sad potty book. She senses there’s something off about it, but some of the pictures are funny, like the cover, and she likes the repetition and the song, which I sing in my own way.

Finally, after I read it one night, she looked at me and said, “Daddy? Why are you crying?”

And my answer surprised me. “It’s this picture here,” I said, “where the boy moves out of his mother’s house. It makes me think about when you’ll move out of here.”

But then who’s the blond girl in the picture, with the pony tail?