This was CJ’s third time trick-or-treating in this neighborhood, and the first time she made it all the way around the block. The year she was one, we went to the house of the friendliest neighbors we knew. When they opened their door a skeleton leaned out. And that pretty much made an end to the evening. Here is the last known photograph taken that night. 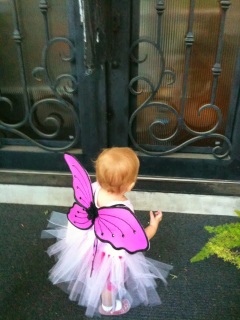 CJ’s second year all the neighborhood children gathered at a supposedly safe house before setting out. The host’s four-year-old grandson was wearing a Hulk mask, which set CJ to screaming. I took the mask off and see, “You see, it’s just a little boy. Nothing to be scared of.” And she agreed with me, until he put the mask back on. The boy’s name was Cooper, but CJ pronounced it Goober. I didn’t correct her. Here she is showing everyone what the Hulk’s snarl looks like. Despite this brief show of courage, it was another short evening. 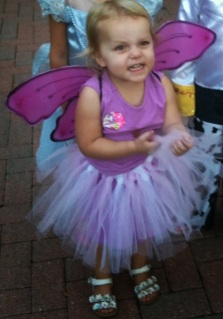 This year CJ declared she was a big girl and wasn’t scared of anything. Plus she had a magic wand.

And she pretty much walked the walk. She even asked to go alone into the haunted house that one couple had set up in their garage. CJ made it into the garage without incident, but when she came out a zombie slowly sat up in his grave, and she grabbed my pants leg. Good thing she had a magic wand! I borrowed it and made the zombie lie down again. And that — plus a handful of M&Ms — gave her the strength to complete her trek.